This past month has been a busy one. Msafiri and his band traveled to Uganda to participate in the DOADOA East African Performing Arts Market as one of the showcases. They performed on May 9 in Jinja at the Nile Casino Hotel for an enthusiastic crowd chanting “We want more!” to bring two encore songs from the band. It was an exciting experience and we hope they will be returning later in the year for the Bayimba Festival in September.

The day after returning from Uganda, Msafiri and his organization APF Tanzania, held an event Pamoja Jam with three bands in Bagamoyo, Tanzania. Msafiri Zawose and Sauti Band performed alongside prominent Tanzanian reggae musician Jhikoman, and local performer Man Kifimbo. It was a long night of music and dancing to celebrate Bob Marley day.

The past week Msafiri has been practicing daily with the band to prepare for a recording session with APF Studios in Bagamoyo. The band has not yet been able to produce any recordings as a full group, so this marks the start of their efforts to create an album showcasing the songs they have been performing for the past 6 months at festivals in Uganda and Tanzania.

It has been some time since we have updated the blog! A lot has happened since last year. Msafiri completed his US tour in August 2012, finishing up with a final performance with the Star Visions Community in Upstate New York. One of the members saw Msafiri’s performance at the Falcon in Marlboro, NY the month before and approached him after the show to see if he would come back to teach her community about his culture and do a live performance.

The past year has been a busy one. In the fall of 2012, Msafiri worked diligently with his organization, Art Promoters Foundation Tanzania, to construct a recording studio. APF Studios opened to customers in February 2013 and has been able to attract a lot of attention in the Bagamoyo community. The studio is fully equipped with the needed supplies to record high quality sound, with the software for mixing and mastering of tracks. The studio is one small part of the larger efforts of Art Promoters Foundation, which strives to maintain close connections with traditional culture and to engage the community in the arts. Msafiri has been hard at work with APF to organize and promote shows in the area, which has been met with great enthusiasm! People have come to  look forward to these events. The upcoming event in May will be help at Skylight Lodge in Block P in Bagamoyo, Tanzania and will feature Jhikoman (reggae), Kifimbo, Msafiri Zawose, and Sauti Band. There will also be a screening of the documentary “Marley”, as the event falls on the anniversary of the death of the great Bob Marley.

On May 8, Msafiri and his band will travel to Uganda to participate in the DOADOA East African Performing Arts Market and will be showcasing his music on the night of May 9th in Kampala. The link to the festival can be found here.

The performances at the festival were all amazing. It was very nice to teach people about traditional Tanzanian music because they have never heard it before. The first performance was at Eden Hall and people were very enthusiastic and energetic during the show. Many people approached me over the weekend to ask me about our culture, Tanzania, and the music. I had the opportunity to sit at the LEAF International tent where people can get more information about the LEAF programs around the world and one of them is in Tanzania.

On Friday at the school and on Saturday at the festival the children had the opportunity to show everyone the dances and songs they had learned over the past week. Their teachers and parents were all excited to see them on stage and they did a great job!

During the festival I also got to meet with many other people and other musicians. It was also good to learn about American culture. I witnessed the Golden China Acrobats, Seun Kuti & the Egypt 80, Taj Majal, and many other good artists at the festival. I also found wali na maharage (Rice & Beans) which was reminding me of my food in Tanzania! The other food at the festival was nice, but different from what I am used to in Africa.

My last performance was for the LEAF Member’s Brunch on Sunday in the Barn. The Barn was a very cool venue and this was my favorite experience at LEAF. The crowd was excited to hear the music and it was a cool setting. The drummer from Tony Cedras and the South African All-Stars played along with me as I performed “Mahela” and “Mnyamae” 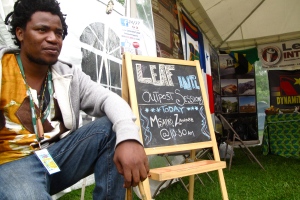 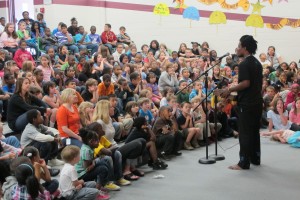 This is the fourth day of workshops with the kids at Hall Fletcher Elementary School in Asheville, North Carolina. I have been working with the second graders on three different dances. Tomorrow they will perform for their school and then on Saturday they will all come to the LEAF Festival to perform. It has been a great experience, but very difficult to teach three different classes for two hours each and to make sure the children learn the whole dance and song in one day. The kids have never seen African dance before and had many questions about Africa and Tanzania. The dances can be a little bit hard and the kids got tired quickly! It has been good, though, to teach them about a new culture that they didn’t know before. They have had so much fun learning the dances and singing the song.

North Carolina is a very cool place because we are in the mountains but there was nice sunshine and beautiful scenery. I am staying in a house in the woods in Black Mountain and interacting with the other musicians doing residencies in the area. It has also been funny to wave at everyone because everybody will greet you when you pass them and I did not expect this in America! It is a different experience depending on which area you visit in the States, but everyone here is extremely friendly and always greet you when you pass by.

Also- since I have been here in America I have had some very nice fish! All different kinds- fried, baked, blackened.

Tomorrow is my performance at the LEAF Festival. The show will start at 4:00 pm in Eden Hall until 5:15. I hope to see you all there! Karibuni sana

Drumming at Hall Fletcher with the kids 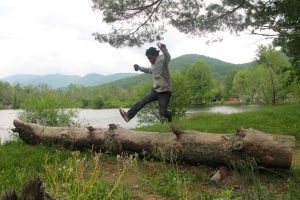 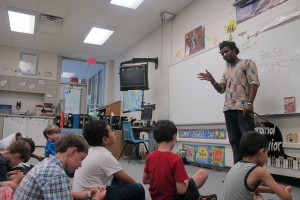 I have arrived in New York City on the start of my 3 month US tour from May-August after a 26 hour trip from Tanzania! Tomorrow we will drive to Tennessee and then off to North Carolina for the LEAF Festival where I will perform and teach a week long drumming and dance workshop to children at a local school.

Fitting all of the luggage into the car 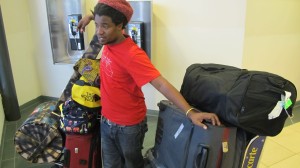 At JFK airport in NYC